CMR Random Packing was developed and introduced to the market in 1971.It became the first commercially successful high performance random packing. Since its introduction, plastic CMR random packing has been utilized in thousands of successful installations around the world in a wide variety of absorption, stripping and heat-exchange columns.

CMR packing achieves better capacity and efficiency than standard Pall Rings. This improvement in performance is a result of the low "aspect ratio" of 1:3 (height of the cylinder is 1/3 of the diameter).

In a bed of Pall Rings, many of the rings are oriented with nearly-horizontal cylindrical axes. These rings impede vapour flow more than their nearly vertical neighbours. However, when a bed of CMR packing is installed, the lower aspect ratio causes most of the rings to lie with their axes nearly vertical. This preferred orientation better exposes both the interior and exterior surface of the rings to the liquid and vapour flows, providing more efficient use of the packing surface. CMR packing attains greater capacity for a given size/efficiency.

The low aspect ratio of the CMR rings, along with this preferential orientation, brings about substantial improvements in process performance: 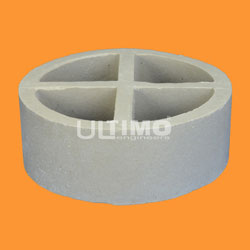 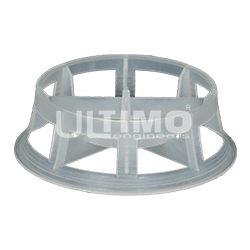